One of the three National Parks of Yorkshire

The vast 555 square miles (1,438 square kilometeres) of Britain's first national park starts at its northern edge in Yorkshire and extends into Derbyshire, Cheshire, Shropshire and Staffordshire across the southern reaches of The Pennines.

Yorkshire is the gateway to the northern Dark Peak area of the Peak District, characterised by gritstone and peat moorlands, although these are increasingly being revegetated with heather.

The area has vast plateaus with some rocky outcrops and deep stream-filled valleys, known as cloughs.

Some of the larger valleys are occupied by reservoirs adding to the beauty of the local landscape.

The land rises in places to rounded peaks which on a day clear of low cloud can offer breathtaking panoramas for many miles across Yorkshire. One such point is West Nab at 501 metres, above and the Wessenden Valley which leads to in West Yorkshire, a village a few miles from .

The highest point, however, is on the more remote moorland of Black Hill. At 582 metres this was once the highest point of the historic county of Cheshire, although it is now the Derbyshire border with West Yorkshire.

The National Park was designated on April 17, 1951 after decades of public campaigning for a right to roam in open areas of countryside, including a mass trespass on Peak District moorland in the 1930s.

Today the area offers excellent opportunities for walking, from well signposted paths and tracks in the lower reaches of the park to more challenging hiking conditions on the open moorland, which is crossed by the Pennine Way long-distance hiking route. 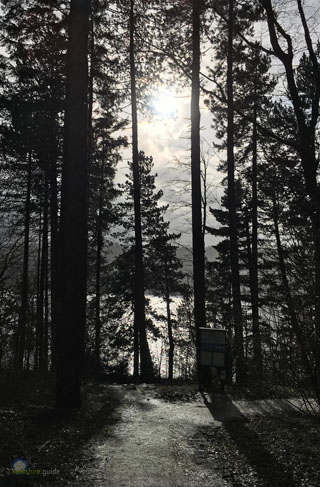 There are also cycling opportunities in the area. The ultimate challenge might to be to cycle across Holme Moss, where the road summit is 524m (1719ft) above sea level. The route formed a King of the Mountain stage when the Tour de France came to Yorkshire in 2014. The splendid scenery of the area can also be enjoyed from several moorland pubs and restaurants at the edges of the park.

The park offers a wealth of leisure opportunities for the 16.1 million people living within an hour drive of the national park and for visitors from further afield.

Beyond Yorkshire's rugged Dark Peak is the White Peak limestone landscape and small villages and towns of Derbyshire and the heather mooorland, hay meadows and pastures of Cheshire, Shropshire and Staffordshire.

If travelling out of Yorkshire, the limestone scenery of the Derbyshire Dales can be reached through a short train ride from .

A millstone is the characteristic symbol of the park. The millstones were traditionally used in use in corn mills and are known to have been produced in the area of the park from at least the 13th century.